Skip to content
You are here
Home > Featured > Neymar, Carvajal Plus Other Players You Never Knew Were Once Teammates

Football takes you to different parts of the world, turns friends into enemies, teammates into rivals, while you also gain experience and knowledge of the game,

As a result, FreshSports.com.ng takes a look at five footballers you never knew play alongside each other

First on the list, is PSG star Neymar Jr and Real Madrid defender Dani Carvajal. The two players played on the pitch as teammates and as opponents. Back in March 2006, Neymar spent some days at the Real Madrid’s youth academy and featured alongside Dani Carvajal in the 2005/06 Infantil A squad.

But a deal could not be agreed between Real and the Brazilian, so he went back to Brazil to play for Santos. Dani Carvajal graduated to Real Madrid Castilla before he was sold for €5million to Bayern Leverkusen. However, Real Madrid bought him back for €6.5milllion.

The CAF best Player for 2019 was a teammate of the Belgian at Southampton. The year 2014 was a busy one for the Saints as six players left, while they brought in six players which included Sadio Mane from RB Salzburg and Toby Alderweirld from Atletico Madrid.

It was a good year for Sadio Mane at the St Mary’s, but same could not be said of Toby Alderweirld who had few appearances before heading back to Spain. 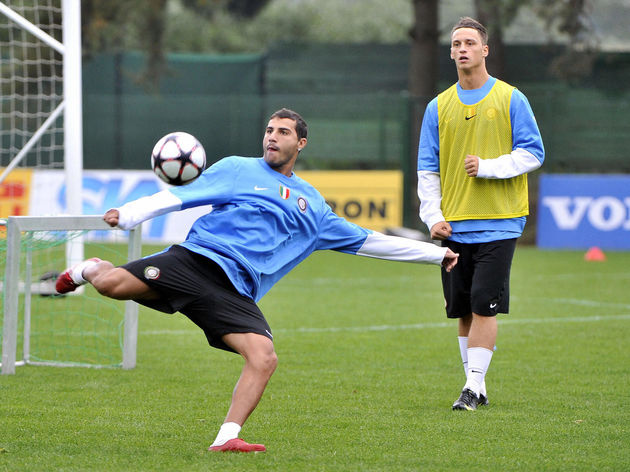 Yes! it happened, in 2010, at Inter Milan. The Austrian footballer was part of the Inter Milan team that won the treble. Zanetti needs no introduction, but Marko came from Twente on loan to the San Siro. He played a few matches but most importantly won the Uefa Champions League, Coppa Italia & the Serie A

They were teammates for 18 months at Bayer Leverkusen from January  2009 -July 2010. Toni Kroos came from Bayern Munich on loan, while Arturo Vidal was a $1million signing from Colo – Colo in Chile. They both had good spells at Bayer Leverkusen. Just like Neymar and Carvajal, Kroos and Arturo were once teammates, but they are now rivals in Spain.

Hoffenheim signed the Liverpool forward in December 2010,  while the Everton attacker joined the Bundesliga side from Reading on the 31st of August 2010.

Gylfi Sigurdsson was voted as Hoffenheim’s fans’ player of the 2010-11 season after scoring 10 goals, and providing two assists in 13 matches.

Roberto Firmimo on the other hand, never made a big impact that year. Gylfi left for Swansea on loan in January 2012 before he was eventually sold to Tottenham that same year. “

Bobby” Firmino had his best season for the team in the 2013 –14 season in the league, scoring 16 goals, and that earned him a move to Liverpool the following year.

They now play in the same city for different teams and bitter rivals. Roberto Firmino is on the red side of Merseyside (Liverpool), while Gylfi Sigurdsson plays for the blue side (Everton).