Skip to content
You are here
Home > Football > Betting Tips: These are games you should consider putting money on this weekend

This weekend promises to be another interesting one across the top five leagues in Europe. The title race in the Italian Serie A and the French Ligue 1 have been decided already with Juventus winning their eighth successive league title in while Paris Saint Germain also sealed their fifth league title in six years.  Nevertheless, there are still exciting matches to look forward in these leagues especially in Serie A.

Moving over to other leagues in Europe, Barcelona will win their second successive league title if they beat Levante on Saturday, but the battle in the English Premier League looks set to go down until the last day.  The Bundesliga title race will also go down right to the wire with Bayern Munich just a point ahead of Borussia Dortmund.

Aside from the title race, the battle for European spots is also at the intriguing stage across Europe.  With many big matches taking place this weekend, these are the games that are worth staking on.

Tottenham vs Westham: Following their win over Brighton on Wednesday, Spurs will hope to pull further away from their top four rivals with a victory over London side West Ham.

Prediction: With an eye on the Champions League semi-finals against Ajax, Pochettino will likely rotate his squad. However, the Lily whites should still have enough firepower to see off the Hammers. (Tottenham win or Over 2.5)

Barcelona vs Levante: The Blaugrana will be hoping to wrap up the league title ahead of their champions league semi-final clash against Liverpool on Wednesday. They face a Levante side who have only won once in their last twelve away games.

Prediction: Barcelona will definitely have an eye of the champions league clash against Liverpool but they won’t pass up an opportunity to win the league with three games to spare. They face a Levante side who sits in 15th place on the La Liga table so should have no problem seeing off the challenge. (Barcelona win or Over 2.5)

Nuremberg vs Bayern Munich: Bayern Munich will hope to maintain their lead at the top of the table when they travel to 17th placed Nurenberg. There’s no room for any slip up from Niko Kovac’s men especially with Borussia Dortmund playing a day earlier. 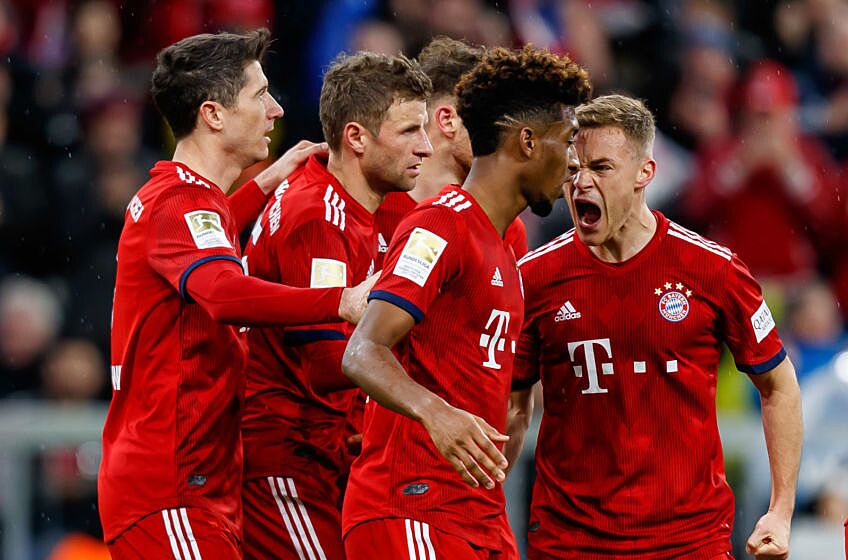 Prediction: Niko Kovac’s are likely to be two points behind by the time they kick off if Borussia Dortmund beat Schalke a day earlier. Nuremberg are dead certs for relegation, so should not pose any threat to the Bavarians. (Bayern Munich win).

Burnley vs Manchester City: Following their impressive win over City rivals Man Utd on Wednesday, City will hope to cement their hold on the top four when they take on Burnley on Sunday.  However, With Liverpool set to return to the top if they beat Huddersfield on Friday, City would be fired up to take up the maximum points on Sunday.

Prediction: This match is the trickiest of all the remaining matches for Manchester City especially with Burnley still not safe yet. However, with so much at stake, City are expected to pick up the Maximum points.  ( City win or over 2.5)

Manchester United vs Chelsea: This is a match neither teams can afford to lose. It’s been billed as the top four battle with the losing team likely not to finish in the top four.  United will be hoping to bounce back having lost their last three games while Chelsea who currently sits in the final spot for the Champions league will hope to pull further away from their rivals with a victory. A draw will do no good for any of the team’s prospects with Arsenal and Spurs also in the mix for the final two spots for the Champions league.

Prediction; Chelsea go into the game given United’s recent form. However, Solskjaer’s side will want to prove a point in front of their fans. (Draw or Chelsea win)